Against the littering of the world's oceans
More information

I'm collecting with you - I'm in

Now it's your turn - become part of our movement

Stand up for a clean environment

Our vision for Africa

Our pilot project in Africa - helping people to help themselves

Environmental education for children, students, everyone

Promoting mindfulness and sustainability for the next generation

"The IFOPR networks all independent value-adding actors to bring waste back into the economic cycle as a raw material." 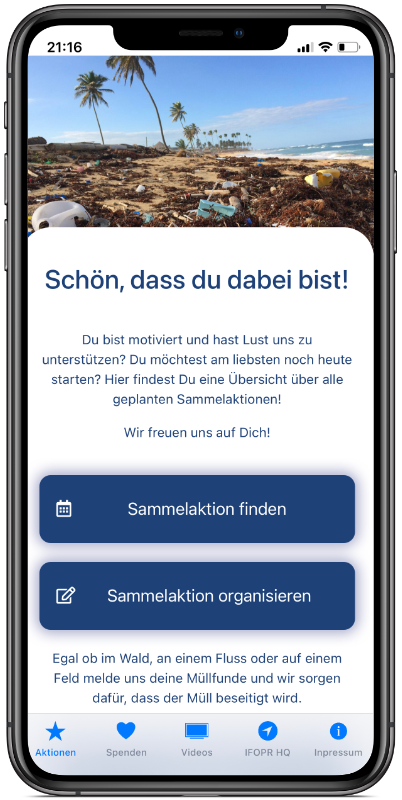 Clean Up Now – together for a clean environment

With our app, you can network, organise joint waste collection campaigns or participate in campaigns. In addition, you can use our “litter reporter” to report major littering and help to clean it up..

The Institute for Ocean Plastic Recycling

The Institute for Ocean Plastic Recycling is a non-profit organisation from Würzburg, Germany, which has set itself the task of freeing our oceans from waste.

Every year, 10 million tonnes of plastic waste enter the world’s oceans. As a result, by 2050 there will be more plastic than fish in our oceans if we do nothing about it.

The time to act is now!

We are convinced: The best way to solve the litter problem is to start at the very beginning. That is why our approach to solving the problem prevents litter from entering the oceans in the first place. In the form of action days and litter collection campaigns, we create a framework in which we offer all interested parties the opportunity to organise themselves among themselves to collect litter together in cities, river and beach regions.

From my point of view, we no longer have time to continue waiting or to look at new scientific results. We have to do it. Now!

For me, it is about time to tackle big things to preserve our blue planet. – Herbert Hornung

From my point of view, we no longer have time to continue waiting or to look at new scientific results.
We have to do it. Now!

For me, it is about time to tackle big things to preserve our blue planet.

We see ourselves as networkers and want to create awareness for the already visible consequences of pollution. We want to reach and involve as many people as possible, because we can only fight the problem together. We offer everyone who, wants to make a difference the opportunity to participate in our vision.

We want to connect all those people, organisations and companies who want to join us on our way to a clean sea.

Our oceans are sinking in rubbish

Plastic bags, plastic bottles, straws and many other plastic objects are floating in the oceans and if we don’t do something about it, there will be more plastic parts than fish swimming in the oceans by 2050. The origin of the waste can be traced back to shipping, fishing and industry. However, much of the plastic waste is carried into the oceans from the land by wind and rivers. There is simply a lack of infrastructure to dispose of and recycle the waste appropriately.

The five rubbish whirlpools in our oceans

The currents in the oceans carry the plastic together until it finally collects in huge rubbish whirlpools. In the meantime, five rubbish whirlpools have formed in our oceans, 99 % of which are made up of plastic parts. Two of them are floating in the Pacific, two in the Atlantic and one in the Indian Ocean. The largest of these rubbish patches is the “Great Pacific Garbage Patch” in the North Pacific. It is estimated to cover an area of about 1.6 million square kilometres, which is roughly the size of Central Europe, and contains about 1.8 trillion pieces of plastic weighing a total of 100,000 tonnes.

However, the pollution of the oceans by plastic is a problem that also affects our domestic waters. In the North Sea, an average of 11 kilograms of plastic waste per square kilometre has been detected.

The need to act now and tackle the massive plastic problem is obvious. But in order to be able to tackle our long-term goal of a sustainably controlled value cycle, we have to start at the very beginning and make sure that plastic does not end up in our oceans in the first place. That's why, as a first step, we are networking all the people and organisations who want to make a difference - because it depends on each and every one of us, including you.

This is how we proceed - become active with us

Individually we are strong, but together we are even stronger.

In order to proactively tackle the plastic problem, we offer a platform that enables all interested people worldwide to network with each other and make their own contribution to a clean environment. Since one of the main sources of plastic waste comes from land, our platform can be used to organise joint regional actions and events to collect plastic waste in cities or at river and beach regions. Because if we ensure in time that the waste does not end up in rivers or water bodies, we also ensure that the waste does not end up in our oceans. In this way, we want to stop the entry of rubbish at its source and lay the foundation for the preservation of the oceans in their diversity. How you can plan your own action or participate in already planned events can be found here. We will support you!

Our vision - towards clean oceans

Our vision is to sustainably remove the vast amounts of waste from the oceans, recycle it and return it to the economic cycle. In the long term, we want to expand the existing platform and make it accessible to all people, who will all do their part to solve the plastic problem. This will open up new activities ranging from cleaning up the oceans to recycling ocean plastic as a new raw material.

Currently, our website serves as a platform for organising waste collection campaigns. In the long term, we want to expand this platform with an app and give not only private individuals but also other groups of people the chance to network with each other. These are, for example, recycling companies or companies that process recycled ocean plastic.

This holistic approach enables all interested parties to network with others and create a sustainable cycle for ocean plastics on this broad basis.